Hypophosphatasia at a Glance 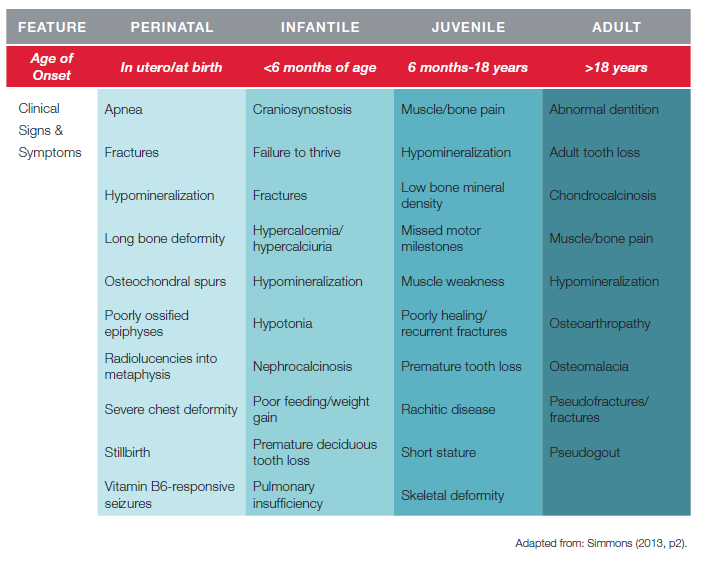 Hypophosphatasia occurs in all races.

Males and females are equally affected.

Hypophosphatasia affects all age groups however, the severity of symptoms corresponds to a general set of categories, depending on when the signs first manifest. These have been identified as perinatal, infantile, childhood, juvenile, adult and odontohypophosphatasia. Typically, the earlier the manifestation of symptoms, the more severe the disease. However, it has been noted that although symptoms may not become obvious until adulthood, onset begins at birth and the degenerative nature of the illness finally reveals itself due to its cumulative effects.

The most severe cases are universally lethal and infants may be stillborn. Affected newborns may briefly survive a few days. The cause of death is usually severe respiratory complications due to hypoplastic lungs and rachitic deformities of the chest. These may occur with fever of unknown origin, anemia, irritability, seizures, and dehydration. Other findings include apnea, craniosynostosis, and marked shortening of the long bones. In lethal cases, there is frequently a near absence of skeletal mineralization. Fractures are often present.

Surviving infants may appear healthy at birth; however, clinical signs of HPP appear during the first 6 months. These infants have a history of poor feeding and failure to thrive, developmental delays, and muscle weakness. The mortality rate for these infants is 50%. Despite the presence of an open fontanelle, premature craniosynostosis is a common finding that may result in increased intracranial pressure. Hypercalcemia is also present, and increased excretion of calcium may lead to nephrocalcinosis and renal damage. Infants may also present with severe epileptic encephalopathy that results in death. These seizures respond to vitamin B-6 treatment.

Skeletal manifestations of the severe cases vary widely among patients. Skeletal deformities (eg, dolichocephalic skull and enlarged joints), a delay in walking, short stature, and waddling gait accompany the childhood form. A history of fractures and bone pain is usually noted. Premature loss of dentition is common; the incisor teeth are often the first affected.

Individuals with less severe disease can reach adulthood, although often with significantly increased morbidity from poorly healing stress fractures and may be severely affected and not able to ambulate. In adults about 23% require the use of a wheelchair; about 25% require the use of a walking device. Commonly, patients experience premature loss of dentition.

Adults usually present with signs and symptoms during middle age; most confirm signs during an in-depth history going back to childhood or even infancy, though some can be completely asymptomatic. As with the childhood form, premature loss of deciduous teeth due to disturbed cementum formation is common. Mineralization of dentin is less likely to be under the influence of the inhibitory action of pyrophosphate than mineralization of cementum. Adults may also have a history of foot pain due to stress fractures and joint pain due to deposition of calcium pyrophosphate dihydrate. Affected adults may manifest osteomalacia, with slowly healing or nonunion stress fractures (commonly metatarsal). Thigh pain, due to pseudofractures of the femur, may also be a presenting symptom.

Odontohypophosphatasia presents with a premature loss of adult teeth.

Diseases that present with similar symptoms: